A fifteen minute glimpse behind the veil into Ashes of Creation's ongoing Alpha Zero gameplay test was just posted over on IGN, offering a fresh look at the current state of the MMO's basic gameplay and a number of different environmental biomes.

The video is worth a watch for the various biomes alone, as though we've seen many of these before, this playthrough provides an on-the-ground look of the world that's more representative of how they look in gameplay then environmental fly-bys, and you're likely to see some areas you haven't seen before in the process.

The clip opens with a Mage, set to be our protagonist for the duration, doing battle against man's most ancient foe: the mushroom. Ever since humanity first crawled from the depths of our nascent cave dwellings and discovered the concept of poison, our struggle against shroomkind has raged on. Based on the evidence in the video, it would seem that humanity's journey to Verra provided no respite for our beleaguered travelers. 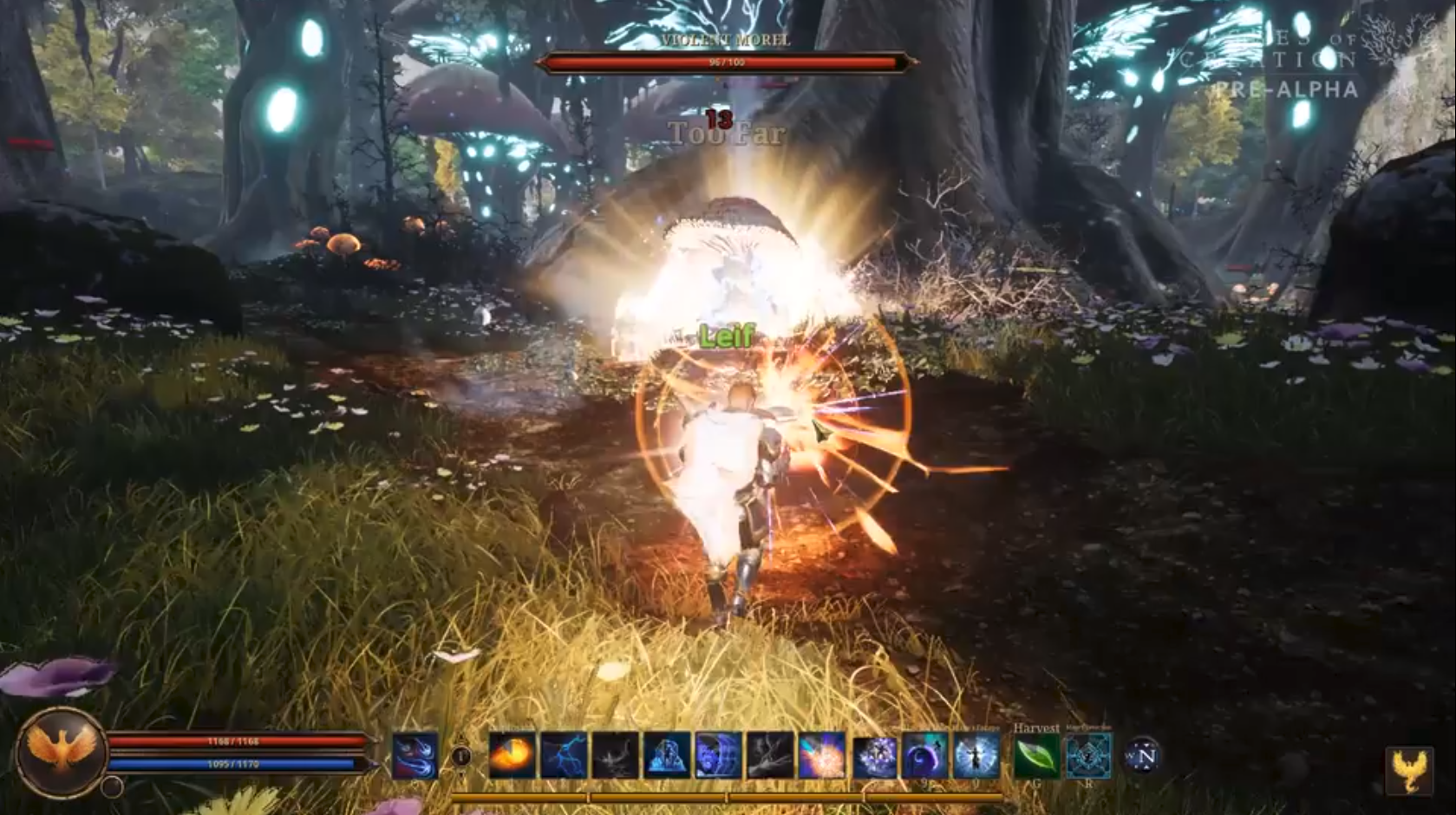 War. War never changes. We're immediately shown the latest in Ashes of Creation's combat as our Mage valiantly defends himself against a fungus most foul. The timer based combos are gone for now - as we've seen in other recent videos - as they are currently on hold while Intrepid evaluates if there are other mechanics or implementations that could make for a more fun combat experience. 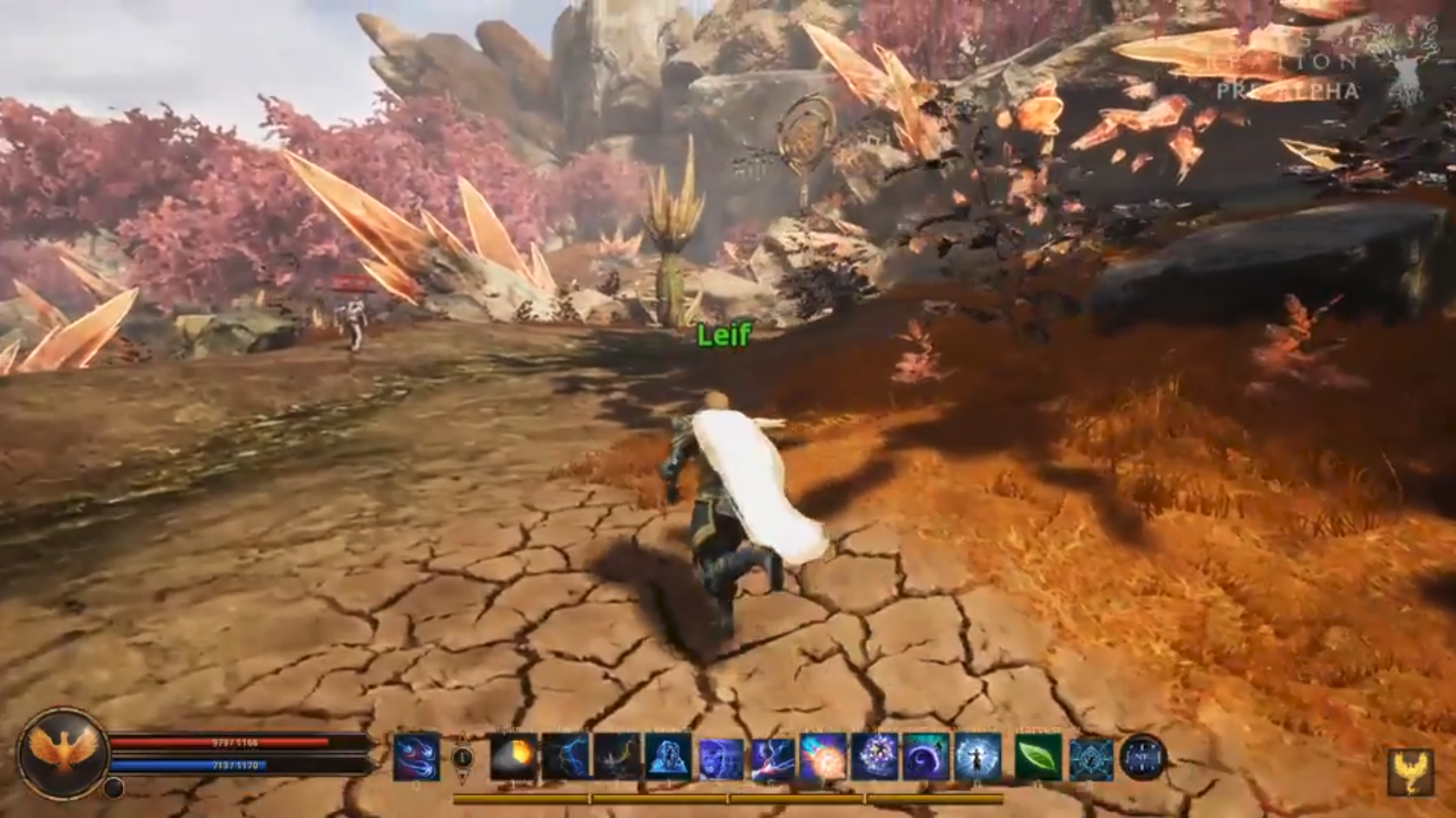 As I watched our errant Mage traverse the mushroom-infested swamp, the scenery continued to pull at my attention. The beauty of the bioluminescent growth is something that's come to be expected in Ashes of Creation, but even after all this time, I still can't help but ooh and ahh a bit when I see it on screen.

The swamp also played host to ruins from a grander time, now in collapsed disarray, sinking into the muck like Artax - only with intrigue and mystique standing in for the place of lifelong childhood trauma.

At one point our Mage swam through a bit of the swamp - entering the water but not diving beneath it. Diving is a feature I'd hope to see in game eventually. Water based content may be terrible (so say we all), but it always feels so wrong when the ability to descend beneath the surface is omitted from an open world game. It's like you're sliding along an invisible wall, artificially blocked from experiencing whatever may lie beyond.

As we approached the end of the swamp, I glimpsed a temperate forest through the edge of the towering mushrooms. I was curious to see how this zone transition would be handled and how abrupt it would feel compared against other MMOs I've played. Thankfully, our Mage crossed the threshold into a mountain meadow, and we were able to find out. 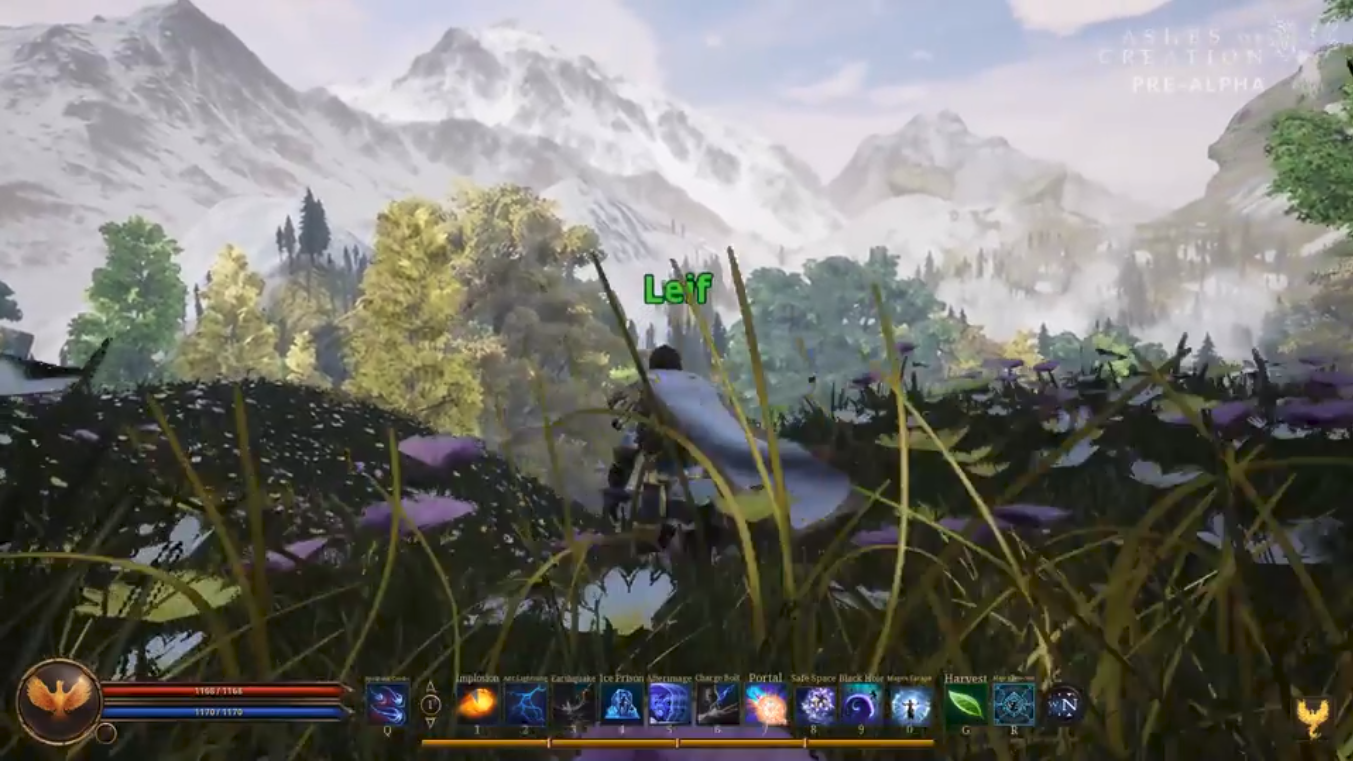 The transition was certainly abrupt, but at least in this instance - and it is harder to tell from soneone else's brief video - it didn't feel unnatural. My theory is that the transition was aided by uneven topography of the zone; rather than crossing from one flat area that stops and suddenly becomes another, I felt as if we exited the forest and descended unto the meadow. It's a minor difference, but one that I felt worked - at least based on this example.

The backdrop of the mountains (I have no idea if they can be reached or not) created an enormous sense of scale as they imposingly towered over the valley. They appeared to become fuzzy off in the distance - a technique that I feel GW2 has used to great effect and that I much prefer to the fog of war we've seen employed by games like The Elder Scrolls Online.

Our Mage eventually reached a town in the mountain meadow, enclosed within ornate, protective walls, and approached the town center. We've seen this layout before, but this time I was able to catch the nameplates on the central NPCs the small crowd had gathered around: a priest. Could this be our first look at a religious node? It's possible that the town's centerpiece, a golden statue in this case, could change in flavor depending on the government of the node in which it exists - maybe even probable.

Potentially adding fuel to the speculative fire, the video cut to a new biome, wherein our Mage adventured through what appeared to be a temple ruins adorned with the same statue seen in town, fighting off animated armor sets as he explored the area.

It's also possible that this is footage of a game in early alpha that's just reusing assets right now. ¯\_(ツ)_/¯ We already knew that weapons in Ashes of Creation were class agnostic (any class can use any weapon), but this also provided a good early example of that system at work.

The video continued on for some time, showing us a number of the other biomes currently available in the Alpha Zero build. From a gorgeous cherry blossom lined river to a desert illuminated by electrically charged crystals, the array of what was shown dazzled and fueled up the hype train.

For those of us who've been around the MMO development cycle a couple of times now, it's impressive how far Ashes of Creation has already made it in what seems like such a short time. While the game still has a long - very long - way to go before it's complete, I think it's reassuring to see the progress they've already made, both as a backer and someone who can't wait to get their hands on the final release.

Be sure to check out IGN's full article accompanying the video to read author Leif Johnson's impressions from his hands on experience.