I was looking at some stuff from the pre-Alpha footage that has been streamed, as people do when they are bored at work, and something that jumped out at me was a momentary glance of the stats panel.  It’s barebones, but it’s pre-Alpha so User Interface enhancements are the last thing on any one’s mind right now.  Still, I think there are a few things of interest to look at from this panel.

It appears that characters will have six main attributes, something that is quite common in a lot of RPGs, such as Dungeons & Dragons.   It's unknown to me what effect each attribute will have on specific classes, 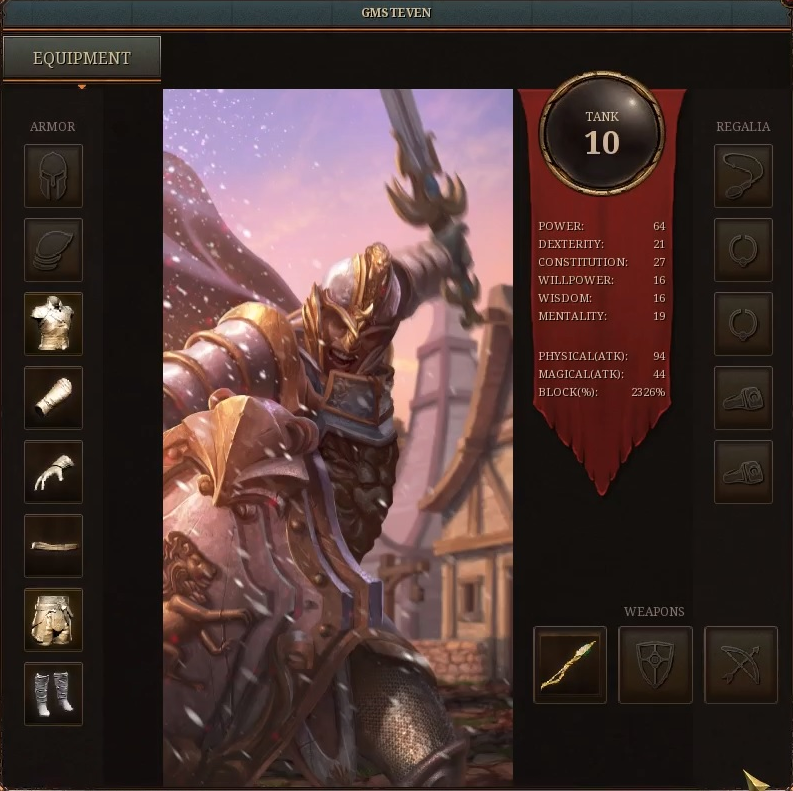 Save this for posterity! or even if a class like Tank will utilize all six of the attributes.  It's entirely possible that Ashes of Creation is following other games where only two attributes are used, one for damage and one for health/survivability.  In the case of the Tank, it could be surmised that the Power attribute is the main damage attribute

Briefly, here are the six main attributes and a few of my first impressions about each of them:

The character panel also lists three other stats directly.  Physical Attack (rated at 94), Magical Attack (rated at 44) and finally Block Chance (23.26%).  Combined with other information presented on this screen, there are a couple of observations that I can make as well as a few questions that crop into my head.

Armor, Regalia and Weaponry Oh My!

The left side of the Character Panel is made up of the armor pieces available in the game.  I’m actually quite pleased to see that there are a number of available slots.  I think gear is boring when it’s limited to only a small handful of items… but eight equippable pieces of armor?  Fantastic!  So let’s take a quick look at what slots we have available, shall we?

How much do attributes effect HP and MP?It’s quite the assortment, and if armor sets are in the game, it could make for some interesting mixing and matching of sets.  Curiously, the provided screenshot shows that our Tank has no helmet or shoulder armor at the moment.  Are those pieces a little higher level?  Or did the person playing want to show off their beautiful head of hair?  We may never know.

As for the right side of the character panel… we can see that there are two sections for items.Regalia in a column on the very right-hand side and Weapons on the bottom.  Let’s start with Regalia first.

There are five slots for what the Ashes team is calling Regalia, though most people might commonly refer to as jewelry:

This seems like standard fare, but combined with the eight possible armor slots, it does look like we will have a lot of options in gearing up our characters.  And that doesn’t even touch on the last three slots:

Our hero, Tank, is equipped with a staff.  That being a two-handed weapon, it’s understandable why he wouldn’t be wearing a shield in his off-hand slot.  The Ranged Weapon slot being empty begs the question… can the Tank equip a bow and plink a few arrows at an enemy?  Or would they have to have a secondary class in order to do that?  If not, can a Ranged Weapon be equipped to work as a “stat stick” (an item that provides extra stats but doesn’t do much else).

What sorts of questions does the character panel bring up for you about possible itemization or character progression?